I love Karen Thorne. I don't know whether it's her intellectual savvy, or the fact that her daughter is an amazing actress (Callie Thorne of Rescue Me and Burn Notice), or the way she conceptualizes, drawing references from a hundred fascinating sources. Whatever it is, something about her makes me want to scramble onto her lap, and have her explain the universe to me. She obliges in short order, although without the scrambling. That would just be inappropriate. 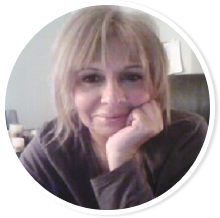 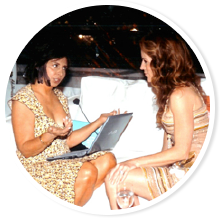 Karen got her start as an astrologer in Boston in the sixties. Being accosted by spirits in the dead of night, she had been waking her terrified roommate (granddaughter of Estee Lauder) with her screams for weeks. After hearing about a psychic of high repute, she decided to go and see her, so that the woman could tell her how to stop seeing these disturbing things. When she got there, the woman informed her that not only would she not be getting rid of any spirits, but that Karen was to become her pupil, and join her every Friday night to learn astrology and self-protection, among other things.

The woman turned out to be famed astrologer, Isabel Hickey, the American answer to Madame Blavatsky. With the beatnik movement in full swing, Karen spent her time with beat poets, writers, and explorers of all kinds, as she developed her craft. Eventually she joined a group of astrologers from MIT, who took a more scientific approach, and with whom Hickey followers had some hostility. By blending the two vastly different techniques, Karen was able to create her own hybrid version of astrology, which is what she practices today.

She will never give a reading without a chart in front of her. Every psychic has the modality that works for them, and for her, the chart is the gateway that makes sense. The chart tells a story, and as the reading progresses she will see images in it, hear voices, and feel things that relate to the client.

Karen tells me that there are seven astral planes, and that the lowest of these is the one that we generally have access to. It is filled with useless spirits and information that can make a lot of noise. The major difference between a psychic and crazy person is the ability to sift through that information to find what is relevant to a particular person or situation. Other than that, she believes it is much the same experience. For her part, she calls on Jesus to protect her, to eject all spirits and information that are not of the highest quality so that she can impart only truth. At first, being non-denominational, this made her uncomfortable. Despite any reservations, Isabel Hickey told her to go straight to the highest level, and Jesus is it. She says she might be surrounded by ten spirits, and when she invokes him, eight disappear, and she is left with the two who have purpose in the matter at hand. Now she's used to it, of course, and calls on him with ease.

Since she sees spirits, I want to know whether she differentiates between a spirit, a guide, or an angel. A spirit, Karen explains, is a being that is not occupying a physical body. Guides, ghosts, and even people who are astrally projecting (sometimes without even knowing it) are included in the mix. Those in distress or who are having strong thoughts about her will often appear, or she will hear them calling to her, and the manifestation is really no different in either case. She cautions psychics against going into the world without proper training. You can be inundated with information that ultimately means nothing, and it can be taxing and confusing.

According to Karen, we actually live in heaven. There, we have our favorite dog, our favorite blankie, our room and our family. When we prepare to take on an earthly form, we do so in the same way as when we leave home and go to college. We are excited and a little afraid, too, since we'll have to forget everything we know when we get there. We meet with a guidance counselor, decide on a major, and areas of emphasis. We also have certain things from past lives that have to be corrected and balanced out. The opportunity to do all of these things, to learn all of these lessons is built into our charts. Jung says that when we enter our body, we are fulfilling a contract we have made with space and time, that we cross the river of forgetfulness when we are born, and step into our chart.

Sometimes we are bad students, of course, and lose focus. Karen says we all come in ready to work, but just as in school some kids don't come back after Christmas break, so it is in life; people quit, drop out. She says there is no worse punishment than the disappointment we experience when our life is over, and we realize the opportunities we squandered, the lessons we failed to learn. Lessons can be learned in two ways: one is the “pedestrian way", where we learn through experience. The other is through realization and understanding. A shift in consciousness can clear a lot of karma, and make way for rapid growth.

Every person on earth begins with a divine mission. Karen loves to steer people toward it, and help them to better understand themselves. In some cases, people can complete one mission and begin a whole new one-part way through their lives while still occupying the same body. There is usually a pluto aspect that presents in these cases, indicating a completion followed by a new beginning.

We begin the first day of this life at the same point of progression we had achieved on the last day of our last life. This accounts for a scenario where three children are born into the same dysfunctional family, and yet only one comes out on top. It's evolution, development of the soul. Some of us are PhDs, and some of us are kindergarteners, I guess.

On love and soul mates, she says we're here to work, all of us, and that we have soul mates, and are occasionally permitted a life of joy with them, but really it's not about that. Sometimes they're just around to teach us. She says if you work at a factory to make parts for airplanes, but you come in high heels and obsess over sex, you're sort of missing the point. So it is with relationships. In unhealthy relationships, she says there is balancing at play. Maybe in your last life, you died under someone's thumb, and now you're here to right that wrong. In such a case, the situation can be damaging and stressful. Once you extricate yourself from it, her philosophy is not to be too hard on yourself. If you wish you had been stronger, and you didn't do exactly as you hoped, remember this: if you survived it, you won.

You can't worry about those things too much. It's just school, after all.

Karen Thorne has been a highly respected practicing astrologer and psychic for many years. Being a Gemini, the dual sign, she has 2 houses, 2 cars, 2 dogs, 2 daughters, writes 2 horoscopes, went to 2 colleges, and had 2 husbands. Her daughter Lily is a writer, videographer, and documentary filmmaker, and her daughter Callie is a Golden Globe nominated actor. She has a global clientele, including actors, musicians, writers, therapists and politicians, most notably Bill Clinton, and John Kerry. She currently lives in the west village and can be reached at http://www.karenthorne.com.
© Karen Thorne. All rights reserved. Powered by DreamingCode